There is a considerable amount of published baseline data, particularly on horses and humans, from 11.2mm diameter tips (chosen, we assume, to give an area of 1cm²). It shows far more variability than data from smaller diameter tips. We think that this is partly because of the high forces required to elicit a response when stimulating this area of tissue which tends to lead also to high rates of force application.
The relationship between the area of tissue that is stimulated and the force required to reach threshold is complex, and not fully understood. Research (by ourselves and other groups) indicates that the threshold force is linearly related to the diameter of the probe (and possibly to its square root).  The graphs in this poster show data taken from two humans (Michael Dixon and Polly Taylor).

Note also that, even under our controlled conditions (where we could position ourselves to apply the force easily) the scatter of the data increases with the probe diameter.

must apply to the surface and so we are forced to the conclusion that, if threshold force increases linearly with tip diameter (and not with probe area) then the surface pressure at threshold is falling as the probe diameter increases.

So if the surface pressure is falling, then why does the percieved stimulus intensity remain the same? There are at least two possible explanations:

With animals, one must also take care that the force is not so great that it simply pushes the animal, or limb, away from the probe. So, while we recommend either 2mm or 4mm diameter probes for use with medium or large dogs, we would certainly prefer a 2mm tip for small cats or kittens while for cattle and sheep, who are generally more stoic, we would suggest a 1mm probe.
For our limb mounted actuators, we have now standardised on a single, central probe of 1mm or 2mm diameter, although other sizes and configurations (we have used three pins in a triangle in the past) are still available on request.

Click here for a Topcat review poster  from the WCVA in Capetown 2012 showing the relationship between tip diameter and baseline threshold force from 80 published studies on animals.

Click here for an oral presentation given by Dr M J Dixon, at the same conference, describing the effect of tip diameter on threshold force, as measured on two human subjects. (The poster was produced for the Pain meeting in Milan the previous month) 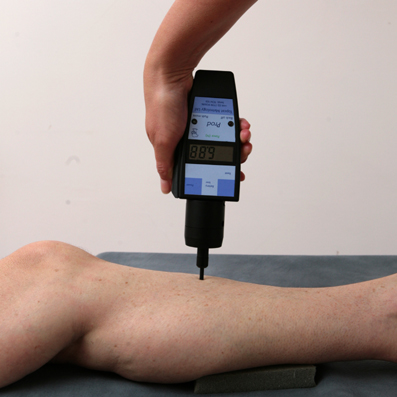