Topcat’s thermal nociceptive threshold testing systems are designed around a thermal probe containing a heating element and a temperature sensor. The current version shown here is the result of 10 years development. Weighing just 4 grams, and designed for placement against shaved skin, the heater element protrudes from the flat surface of the probe by a carefully controlled distance to ensure the best possible thermal contact. The thermal paths are designed for high accuracy during the measurement while minimising the thermal mass, thus ensuring rapid cooling after the threshold is reached and minimising the chance of tissue damage.

The entry level system, TT1, for large and small animals, connects this probe via a thin, flexible ribbon cable, 3 metres long, to the control unit. The probe is mounted on the shaved thorax via a pressure bladder to ensure a constant and reproducible pressure. For limb sites (where the dimensions are unaffected by breathing etc), an elasticated band is used. The control unit indicates the skin temperature before a test on a digital display. When the stimulus button is pressed on the handset, the probe heats. At the threshold, the stimulus button is released by the operator and the maximum temperature is held on the display until the reset button is pressed.  The system includes a safety cutout, factory set to 55°C but adjustable by the user, and interlocked so that the power must be cycled after a cutout before the next test. 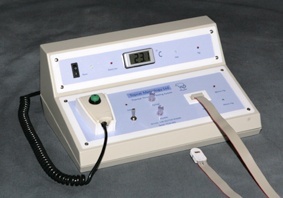 The ribbon cable connection from the probe to the control unit allows reasonably free movement of the test subject but it is, inevitably, prone to damage. With some species, natural behaviour may also be inhibited during the test. These issues are addressed by our wireless systems.

It is designed for small animals (cats, dogs, lambs and larger rabbits), and is operated from a two channel infra-red handset, one channel to apply the stimulus and the other to reset the system after a test and to allow the skin temperature to be read. The system is failsafe, the stimulus being removed if the infra-red signal is lost and with the same safety cutout at a pre-set temperature. 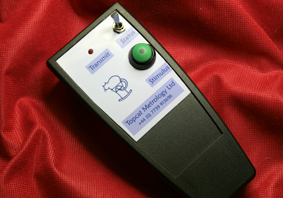 The probe may be contained within the band (and with the contact pressure applied by the bladder monitored by the system) or it may be attached elsewhere on the subject and connected by the same thin, flexible ribbon cable. In both cases, contact pressure may be applied via the bladder and monitored by the system. The control modules are light and comfortable for animals to wear, thus allowing free-ranging natural behaviour without discomfort; this allows evaluation of potential analgesics over periods of up to 24 hours without intervention. Click here for some information about the system in use at the University of Saskatchewan. 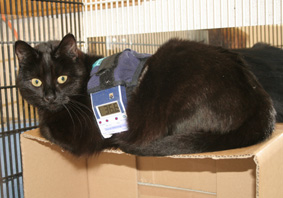 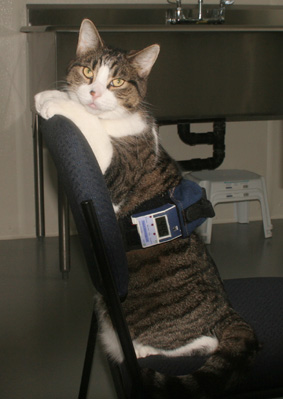 This system is designed specifically for large animals such as horses, cows, and larger sheep. It has the same functionality and flexibility of probe placement as the small animal version, but with duplicated displays and status LEDs on both sides, making it much easier to read and control without approaching a large animal in a stall or box. 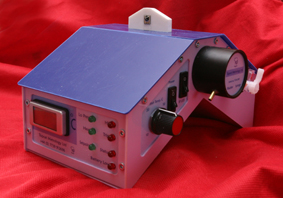 The system has been used in ambient temperatures of 10 to 35°C. Click here for the datasheet. 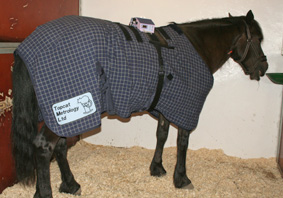